Very popular with young and old... 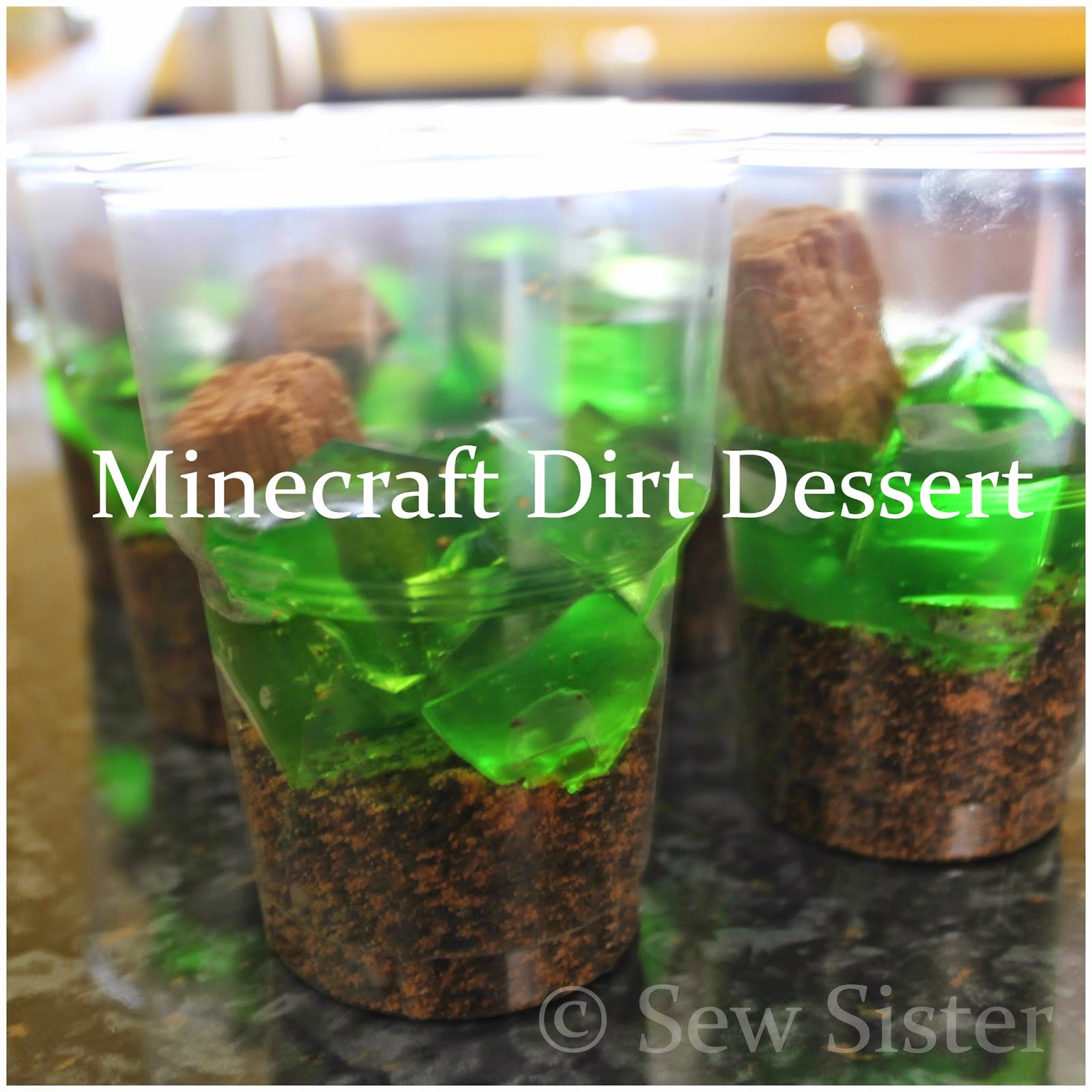 I used FarmBake Chocolate Chip Fudge Cookies (in the big bag).  I then measured out enough for a packet of biscuits. Ground both the Oreos and the Double Fudge cookies into a crumbly mix with  the Breville Mini Whizz. Then I added some Chocolate Dots to the mix (I didn't measure these just guess work). I wanted the mix to resemble dirt...

Next I made a Green Jelly to the instructions on the back of the packet. I use slightly less hot water. When it has cooled I pour the jelly liquid into a flat pan then let it set in the fridge. When it is ready cut the jelly up into squares.

Now pour the dirt mix equally into clear cups, then place the cut up green jelly on top. Next place a Flake brick on top on the jelly. There you have it...a perfect dessert for a Minecraft Party!

I confess I've really slowed down with my sewing, other things keep getting in the way like Minecraft Birthday parties...I guess I'm lucky I get to have a lot of input into my daughter's son's birthday party. Perhaps that's something to do with the fact that I used to spend my time chopping and cutting resources for children.

I left it a bit late to organize, so some things didn't happen. Like baking the Birthday cake, it was bought instead, and the Pinata never got made. Thank goodness imagine how many lollies there would be....too many!


For a theme party Minecraft is a pretty easy one, (well if you like making props). Google is your friend here, because there are so many resources out there. Some are free and there certainly is plenty of information and ideas when it comes to Minecraft Parties on the Internet. Just check out the many boards on Pinterest. A good site for resources is here also.

I used familyshoppingbag.com. for a lot of the decorations like the banner, food labels, drink labels.

How we played the Minecraft Chocolate Game...


The Chocolate Game consisted of using a Steve Mask, already made from the last dress up day at school. A block of Chocolate wrapped in a Minecraft themed paper (easy to make). A big dice covered in a Minecraft picture on each side. For example, Steve, the Pig, and Enderman instead of numbers. Steve was our six on the dice. For those familiar with this game you will know you have to throw a six in the game to be able to eat the chocolate.

When a child threw 'Steve' with the dice they got to put the Steve Mask on, take the knife and fork, and cut up the Chocolate block, and then EAT the squares of chocolate they cut. But they can only continue eating the chocolate until the next 'Steve' is thrown....Then the child who has thrown 'Steve' has a turn cutting the chocolate up to eat (he has to put the mask on also).

To avoid disappointment, always have a spare block of chocolate handy to give to those who missed out in the game.

You might also want to change the dice value for winning after a while. For example, throwing a 'Steve' no longer lets you eat the chocolate. Now you now have to throw a Pig to eat the chocolate this round.

This changes the dynamics a bit...So the child who didn't throw a 'Steve' at the party they now have another chance. at maybe getting a Pig (you're sort of helping them along).

I can tell you when you sometimes change the value of the dice 'Murphy's Law' kicks in and no winning Pig turns up. You still have one child who doesn't get a piece of chocolate in the game...
But don't worry you can sort it because you have that spare block of chocolate...


The Birthday Cake was bought from The Naked Baker. It was tweaked a bit to make it look more like a Minecraft Cake.