Kisses are a recipe form the 'Edmonds Cook Book'. This is an old recipe book from New Zealand. When I was first married it was the only recipe book I ever had. So it was fun to get this book out again and do some baking with the children.

None of them have ever tasted Kisses before...They are put together with raspberry jam and they are rather yummy!

If you can get your hands on a Edmond's Cook Book you'll find the recipe there.

Sewing From the Past

My sewing is at a standstill, it's the school holidays and I've been having a bit of a tidy up (photo albums). So once again I've been lost to the past...

This is Granny's cat I once tried to chop him up with her big dressmaking shears. Luckily they were blunt and I was stopped just as I had a big hunk of black fur wedged between the blades. 'Monty' the black cat always drunk his milk in a cup, he used his paw to lick it up...Granny used to send me photos of him when I came back to NZ.

The dress on the left is made by Granny I'm not too sure about mine...In the second picture all the sisters are wearing dresses sewn by her also.

The pics at the bottom are two dresses made by me. The one on the left was perfect except for where I placed the buttons. That's always a hard one isn't it? Has anyone got any tricks how they place their shirt buttons?

The dress on the right just got shorter and shorter. For a dropped waist dress there was hardly any skirt, I didn't do alterations to patterns in those days...The yellow dress was one of my self taught efforts, just when I started sewing. There was no one to tell me I should have shortened the bodice a wee bit...and those sleeves are so puffy!

I'm not doing much sewing at present just buying patterns and not sewing...so I've looked to the past for my post...

Do you call the 70's vintage? There aren't  too many photos of me in clothes I made myself. I used to hate people asking me did I sew my outfit? I always pretended I didn't. Before I wore my sewn clothes I always washed them so they they looked worn...Crazy really, but I think I equated home sewn clothes with being poor 'you couldn't afford to buy shop bought ones' also I hated the attention!

Myself with the children is one of my favourite pic's...Of course I avoid the sun now, but in those days you were always in it we didn't know any better...

Gosh how did I turn those skinny straps? I did everything properly back them with no overlocker either and everything was sewn on my Bernina 730.

Here is the Almond King's Pavlova we make with the almond hidden inside...
* 8 eggs
* 2 Cups of Castor sugar
* 1 dessertspoon of vanilla essence or extract
* 1 Dessertspoon of Malt vinegar

When making this Pavlova mix everything together with a electric mixer/beater for nearly 15 minutes. Mix until it's stiff, you should be able to turn the bowl upside down and hold it over your head. Here is a demonstration the Meringue shouldn't fall out...


I place the Pavlova mix and pile it into a circle shape on a greased tray sprinkled with water or use baking paper. Personally I prefer baking paper...it is so much easier.

Bake the Pavlova at 150deg Celsius for about 30 minutes. Then turn the oven down to 100 degrees Celsius and bake Pavlova for about 1 hour. You can leave it to cool in the oven overnight if you like or take it out.

Today I'm making the 'Almond King's Crown' It's a little bit of craziness in my house... Perhaps your wondering how the Almond King came about?

A couple of Christmases ago my daughter decided to put an almond in the Pavlova she was making. The person who found the almond nut in their slice of Pavlova was the Almond King for the day. Except there were no rules in place and we just made everything up as we went along. But now there are too many creative minds at the Christmas table so there are moments of madness when our imagination runs wild...

Really you don't know all the trouble one almond has caused...When the last Pavlova was baked the cook saw the almond and then diverted the piece of Pavlova to someone else. In the meantime the young man saw it too and was so upset....Luckily the girls were too young to notice.

This year we'll have some order because a special crown has been made for the 'Almond King'. Here it is...

To Make:
Basically you make your own template on paper to the size and height you want. This is an adult crown but because it's made out of felt it tucks nicely behind the children's ears and stays on their heads  okay...I didn't want to have an expanding strap at the back. But this is an option you could just make a half crown with wide covered elastic at the back.

I wanted to trim the bottom with fur but left it plain instead....next time!

Do you ever have posts that you have left in 'draft' and forgotten to post? This is my one... 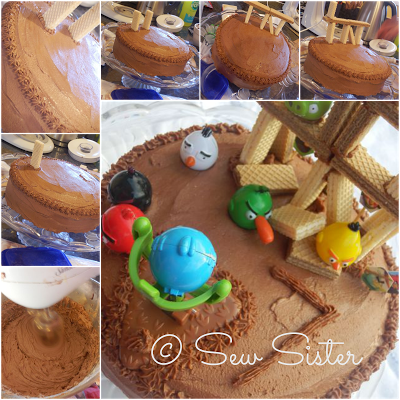 The cake is baked using this recipe here. It is covered with a yummy buttery icing which you beat using your electric beater to make it light and fluffy. Shop bought chocolate wafer biscuits are then used for the framing for the Angry Bird decorations to sit on. 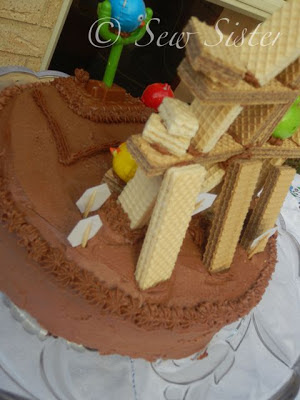 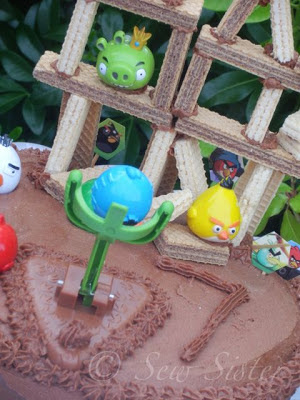 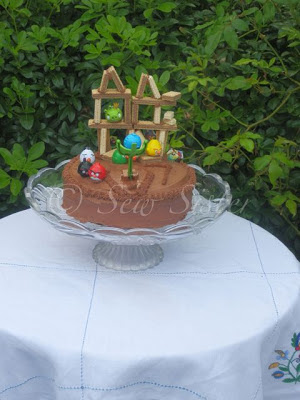 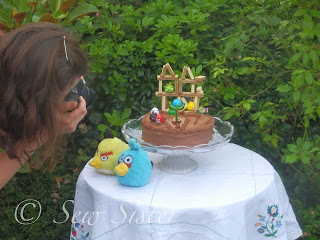 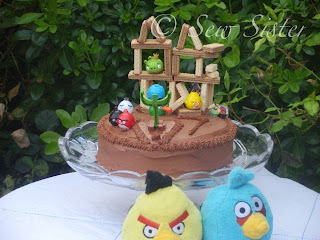 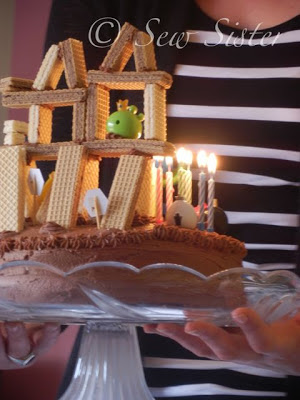 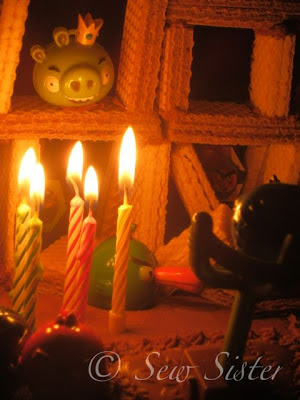