This fabric used to be a sarong/wrap many years ago...As no one wears the wrap anymore I just kept it. I never had the heart to throw it out. 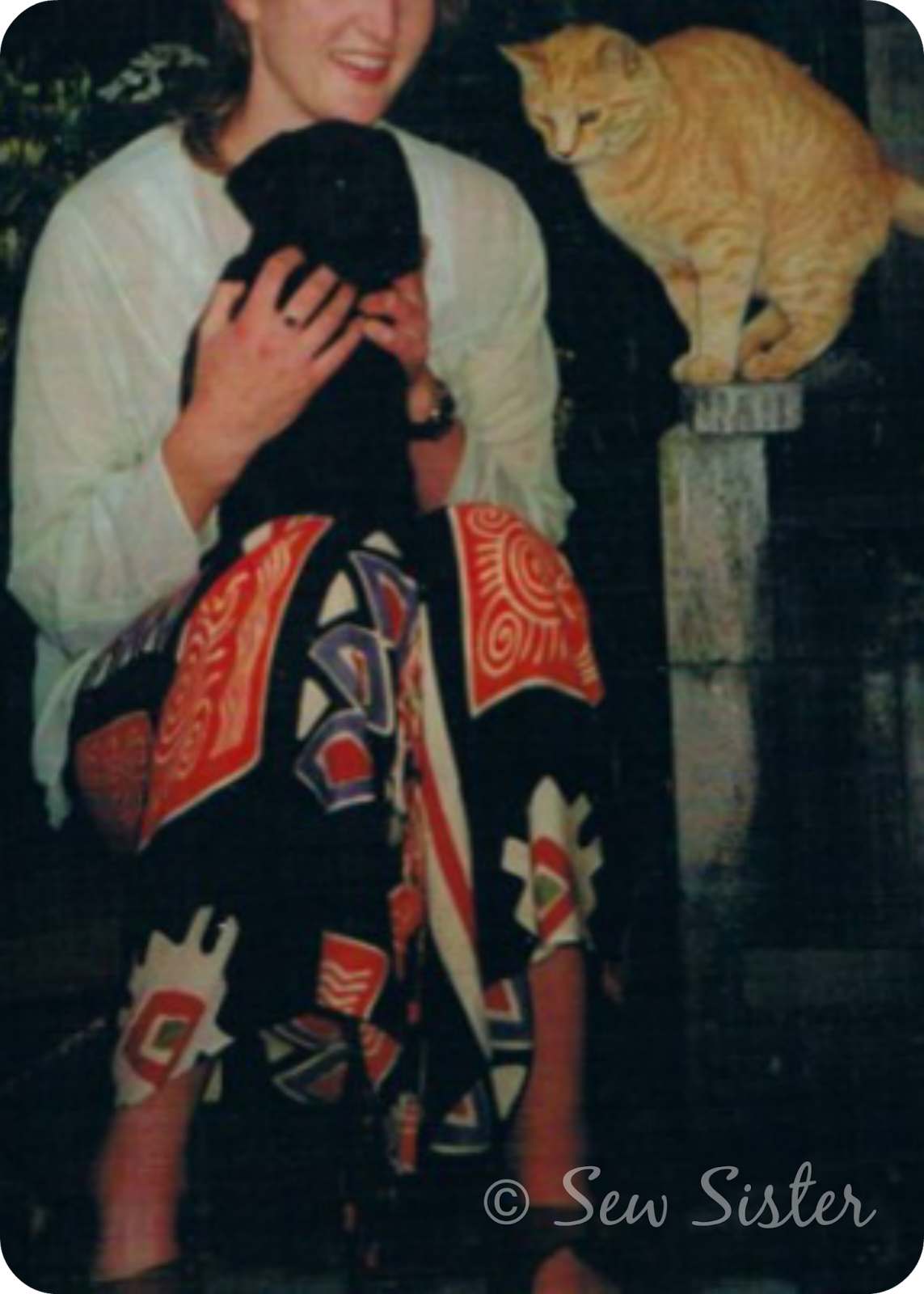 Today it has been cut up and now been totally refashioned into a Kimono Jacket. The pattern I used can be found over at  Sew Caroline. You just need to download the PDF and instructions. It's a very easy pattern to follow with good instructions. It's so easy to make, you should try it too...Caroline has other interesting patterns to buy too check them out here.

There are a couple of free patterns online for leggings that I have been using. One is the Flounced Ruffle Capri Leggings and the other the Girl's Capri Length Leggings Pattern No.8.

Both patterns were very easy to use, and the instructions are clear. So a big thank you to those clever ladies for developing these two patterns. They are perfect...

The size I decided to use was Size 4 and Size 5. It was a bit of guess work for sizing as I had no idea if they would fit the girls or not. They keep growing and I haven't seen them for awhile.

The fabric I chose was a green spotty, winter weight, stretch cotton from my stash. The other striped fabric I bought was a stretch polyester fabric. It hooks up really easily, plus it is not very serviceable. This fabric is going to run, it reminds me of thick nylon stockings, it really is a bad choice. Also it was such a pain to sew, where as the green fabric was bliss...

I used a narrow cover-stitch to hem up the straight leg tights. This worked out very well.

You won't believe this, I wrote all my blog post and lost it, even Apple Z didn't work...Wahhhhhhhhhh!

What was I saying...who knows I have a memory like a sieve. What have I been doing lately? I have actually been sewing for myself, and it has been rather a 'hit and miss' affair'. Some garments were a success and some were not.

The worst one was the 'Peppa Pig' jacket (I've named it that). I sewed it out of thick polar fleece from my stash. The fabric was so pink it really looks ghastly on me. I must say I actually hate polar fleece and avoid wearing it....I just bought this fabric on a whim. I was warned by my daughter, why are you buying that colour? Well I am just like a moth to a flame, I'm drawn to bright colours...Though I was never sure what I was gong to use it for. Really it would have made a better blanket that a jacket

Anyway getting back to my sewing, I have not recorded that much of it because it has taken me nearly over a month to charge my camera. But I did manage take a picture, well half a picture of myself wearing a top.

The pattern:
Is the Cool, Calm and Cowl Necked Top by Hot Patterns. It is a free download over at fabric.com

Was it Easy to sew?
Yes it would have been if it actually fitted me. It did not, and I didn't bother to check to see before I cut the fabric.

What went wrong?
The armholes were rather tight on me, and perhaps it was designed for a much stretcher knit fabric than I had. On finishing it I looked at other reviews of the pattern and other sewers have said the armholes were tight.

What went right?
I can wear it...I had to re-make the armholes as big as I could, though they are still a bit tight which also brought the shoulder seam forward a bit.

What I changed:
I didn't use rib for the band, just the same fabric as the body.

Would I sew it again?
Yes I would and make the armhole larger before I cut the fabric. Overall I can wear it so that has got to be good...

Wearing knit fabric, well anything that stretches has definitely been my down fall over the years, once you wear it you never get out of it. The older you get you don't really notice the widening waist band, you just grow with it. Too late when you get to old age you have to work harder to get the chubbiness off.

Was it the 70's that everything became stretch, body suits, men's shirts? Oh those were the days my husband used to pinch my black shirt style stretch body suit (he was a drummer in a band so I guess it looked pretty cool). Except it belonged to me and I never did get it back. It fitted him so well because it stretched to his size, but it never stretched back to fit me.

The moral of the story is don't wear stretch clothes for most of your life. It's so much easier to tweak your weight when you wear woven clothes that get get tighter. Yes I've put myself on a diet of sorts. Well not a diet really, a good habit lifestyle change....Maybe with some luck the tight sleeves will get looser.

I'm putting it out there Stretch Fabric is to blame for the sudden weight gain in the western world? I might be on to something there...

Yes I know...sadly I can't blame a stretch fabric for a weight gain. It is really is, energy in energy out. But stretch clothing it is a variable that needs to be taken into account, well I think so anyway...On that note I am off to have lunch!