The last few days I've been mending and this time I thought I'd clean up my mess straight away. I spotted a wheel off one of my plastic sewing drawers,  I picked it up and went to sit down on my sewing chair thinking I'll fix this. When suddenly I found myself falling down, did the chair move or was it even there? I landed fair and square on my bottom...I now have a sore butt! Oh the silly things I do to sew...

It probably isn't a good idea to have a sewing chair with wheels on it. But it is very handy to wheel yourself from the sewing machine to overlocker without having to get up...
Posted by Sew Sister at Wednesday, June 26, 2013 2 comments

Email ThisBlogThis!Share to TwitterShare to FacebookShare to Pinterest
Labels: Sewing

I've been busy putting this clown outfit together...Now three days later I have emerged from totally trashing the dinning room. I didn't clean up after my last project and there was fabric, scraps, and thread everywhere. Not to count all the pins embedded in my carpet, lucky I have a big magnet on the fridge!

I wasn't sure how I was going to make a clown costume, until I spotted this wonderful tutorial on sewing a clown costume over at sew mama sew. The style and design looked very simple and quick to sew. I envisaged that 'this will not take me very long'.

Well it took me a lot longer than I thought because I took a liking to putting circles on the clown pants. I had to sew them on using the blanket stitch setting on my Bernina Activa 220. It took me quite a  while to do that...

My exciting moment though was finding these four large red buttons in my button jar. They were perfect for the straps but very tricky to sew on as they have such small shanks.

The sewing pattern I used was Simplicity 2037 (size S) for the clown pants. I just cut the pyjama pants legs much shorter. For the bands, straps, and bow tie I drafted a pattern. The attached straps cross over at the back of the clown pants and are sewn onto the back band. Buttons are then sewn on top of the straps and this  helps hold them in place too.

For the bow tie I cut an oblong 16"x6" and a smaller oblong I think it was 5"x 3" out of the red satin.  But measurements don't really matter for the bow tie. You can make it as large as you like or as small as you like. To attach the bow tie I hand sewed onto a red satin band which is then fastened with Velcro at the back.

This is a  girls dress from Japan and it is made up of cotton patchwork squares. The sleeves are a sort of crochet or knitted type with a few flowers attached. For me it has a lovely 70's feel...I really like the mix of textures...I just like it wished I could make something like it...

Decorating Lamingtons can be a lot of fun for pre-schoolers. They can help whip up the cream and spoon it onto their Lamingtons.  Next they can place the ears,which are made by cutting the tops in half. Next the children can place two small eyes and  a jelly nose onto their funny bunny cream Lamingtons.

Decorating Lamingtons is a good way children can practice their is hand-eye co-ordination. You can even have the children use child friendly plastic tweezers and use these to pick up the M&M's and chocolate dots.. Jelly, though is a little bit trickier so the children may need your help.

Not only are Lamingtons very nice to eat, the children get a real tactile experience decorating them. But you nee to just shut your eyes to all the mess...

Celebrations for a Princess

The 'heels' were a hit with the cat and the girls...and as always the shabby old butterfly wings come out. of the toy box. 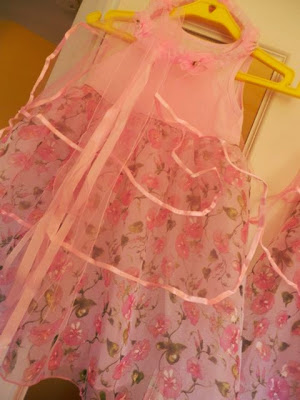 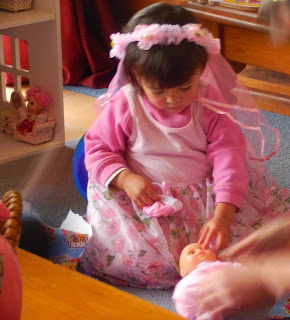 I've been wanting to make princess dresses for awhile. But I didn't want to spend too much on this project as the girls are growing all the time..

So I went out and bought a pack of vests/singlets  (depends what you call them). They come in packs of two which is great... I used these for the tops of the princess dresses, the wee one has already had a fitting.

To make the dresses I just cut the vests/singlets a few inches down from the armhole I think it was three inches. Then I gathered the fabric as full as I wanted and then sewed this onto the top. I used two layers of fabric to make the gathered skirt part. The stiff pale pink sheer fabric was used underneath and the softer pink flower fabric for the top layer of the skirt.

This is not a fire-proof type of fabric so they've all been given strict instructions that these dresses are for playing only and away from heaters etc. I also had fun buying something pretty for their hair and some pretend shoes so they could be dancing princesses.  You can tell I was princess deprived in my childhood. I'm making up for it now...The girls should look cute for their celebrations tomorrow.

Finally my Elna 745 overlocker performed and it did a nice small 2-thread rolled hem finish....

I've taken the old carpet out and  sanded and repainted....It's still it's not finished it's a 'work in progress'.  I put a MDF backing on it in the weekend. 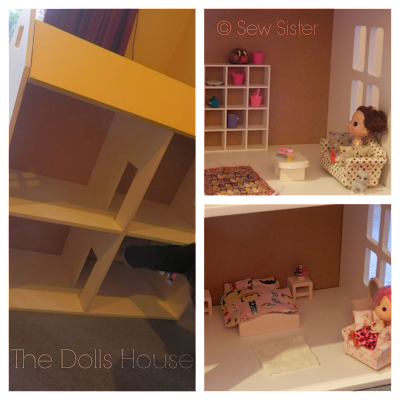 The pattern I have used here is from this website.  You can also download the pattern here. I used a waterproof fabric and added double lined pockets to the bottom of the apron. The size I used was the largest one and I lengthened the apron for the height of the child. It made a very fitted slim full body apron. In hindsight perhaps I could have made it wider...

What I really like about this pattern is that the waist strap is attached by Velcro. Very easy for the child to put on and off with out help of an adult.

This is a Montessori apron I believe...But I think it would be excellent for all early childhood centres like kindergarten and pre-school. This is definitely a good style art apron for older children.

Did it keep the paint off?
Mostly it did, except boys being boys they managed to put paint on each other!

Would I make it again?
Yes I would this is a fabulous pattern and I'll enlarge the size of the pattern as the child grows... 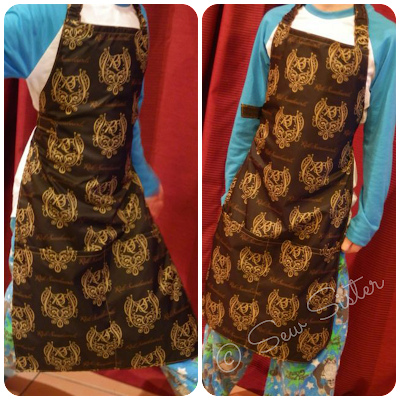 After managing to get totally side-tracked from sewing (I've been painting). I'm now back on track to 'bashing my stash'.  It's going down very slowly.

Finally I have decided to use up some of my elastics left over from making fitted nappies...All my fold-over elastics are stashed away in a ice cream container and it's time to get rid of them. What can you do with fold-over elastic? I'm thinking making underwear is a good idea as I have a few scraps of stretch fabric.

Only to my dismay my knicker and bloomer making was so intense I hurt my back. I had to take something strong to fix it. Bending over a sewing machine for most of the day with bad posture in the cold was probably to blame...I'm okay now though.

The knickers worked out great and were a good fit...But bloomer making was a much harder task even though I used a Kwik Sew pattern. It's a 90's pattern and I think that perhaps I no longer have a 90's bottom...Though the pattern seems very true to size, I just couldn't get the fit exactly right and depending on the fabric I used they were either huge or too small...

Here are some free knicker patterns on line