This is my effort for the 'International Craft Swap'  featuring the colours, blue, white and red.

The wine bottle cover is over in California now, made for Kerrielee at Sew Exhausted. I used a large sized empty wine bottle (on the right in the pic) to draft my pattern from. No...I didn't drink the wine it was corked (2004) and it all went down the drain.

I was happily sewing away and I was almost finished when I decided to go outside for a 'breath of fresh air'.  I was so busy taking a photo of the wine bottle when 'someone' who was sitting outside doing school stuff nearby piped up and said, "You know that's a large wine bottle your using there". "No it isn't" I replied and then rushed off to compare the bottle to another wine bottle. Sure enough she was right!

Here was me thinking that wine bottles must be smaller overseas. Because all the wine bottle cover patterns I  found on the Internet were way too small for the size of my wine bottle. It's a long time since I've drunk wine, I have no idea about the bottle size...

I found an easy tutorial over at sewplicity and used this pattern as a guide also.  Though I have added a different style of tie for a more nautical look, and my turn over at the top is much shorter in length too. 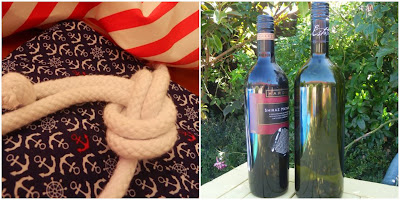